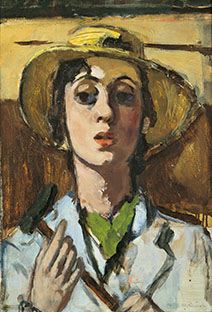 Marie-Louise Motesiczky was the daughter of Henriette Lieben and Edmund Motesiczky. Cultured, well-connected, and wealthy, the Motesiczkys divided their time between Vienna, the Todesco villa in Hinterbrühl and the Lieben estate in Vázsony, Hungary. Edmund took ill and died while on a hunting trip in 1909, when Marie-Louise was three and her older brother, Karl, was six. Henriette and Marie-Louise developed a close, almost suffocating bond, from which Karl felt excluded—and which Marie-Louise would chronicle in a body of highly personal paintings.

Through the 1920s, Motesiczky honed her artistic skills in Vienna, Paris, and above all, in Frankfurt, where she joined Max Beckmann’s master class at the Städelschule in 1927. Beckmann was to remain a lifelong artistic influence and friend.

When Hitler annexed Austria in 1938, Motesiczky and her mother fled to Holland. Karl, who stayed on in Hinterbrühl, was deported to Auschwitz in 1943 and did not survive. After briefly relocating to London, Marie-Louise and Henriette ultimately settled in nearby Amersham. Marie-Louise was romantically attached to the writer Elias Canetti, off and on, for decades, but her connection to her mother was constant. Henriette’s increasing frailty prompted Marie-Louise to buy a house in Hampstead large enough to accommodate them both (along with Canetti and his books) in 1958. Mother and daughter lived together until Henriette’s death twenty years later.

Toward the end of her life, Motesiczky became increasingly concerned about her artistic legacy. She had always been ambivalent about exhibiting: flattered and surprised that anyone should like her work, devastated if they did not. She nevertheless had several successful exhibitions, most notably, at the Vienna Secession in 1966; the Goethe Institute in London in 1985; and the Belvedere in Vienna in 1994. Motesiczky’s relative wealth meant that she never had to sell her work. She was loath to part with it, but recognized it would outlast her. To this end, in 1992 she established the Marie-Louise von Motesiczky Charitable Trust, so that her oeuvre might be posthumously dispersed and appreciated.

After the artist’s death in 1996, the Trust mounted exhibitions at Tate Liverpool, the Museum Giersch in Frankfurt, the Wien Museum, and the Southampton City Art Gallery. In collaboration with the Trust, the Galerie St. Etienne organized Motesiczky’s first American show in late 2010, and followed up in 2014 with a selection of the artist’s “mother” paintings.